About Our Historic Inn

Cornerstone Bed & Breakfast was built in what was once sprawling farmland, dotted with extravagant country estates. This was the rise of Hamiltonville, thanks to the waterworks, gas line, several bridges, and most importantly, the street car. What had begun as Hamiltonville in the 1860s soon became Powelton, Philadelphia, Pennsylvania’s first street car suburb.

Our home was built for Mary Sellers Bancroft, the widow of a wealthy Philly manufacturer, Edward Stephen Parrish. She was the grandmother of celebrated American painter Maxfield Parrish and the great niece of famed Revolution-era portrait artist Charles Wilson Peale. Mary’s family was invested heavily in the area, and constructed and resided in a number of the Powelton Village residences that still exist today. 33rd & Baring became a Seller’s/Bancroft Family compound; an escape to be with the ones they loved. Maxfield spent time at Cornerstone as a child before he left to study art in Paris, and later returned to study at the Drexel Institute. Mary was one of the founders of the West Philadelphia Hospital for Women. In 1880, out of the goodness of her heart, Mary allowed Colonel Barton Jenks, mechanical engineer, and his family to live here during his misfortune.

Jenks was a manufacturer of textile machines, when during the Civil War he produced rifles for the Union Army. He made a militia of his own workers to fight Robert E. Lee’s troops when he invaded Pennsylvania, paying $3 to the wife of any man who would enlist. Jenks led the victory parade down Broad St. on July 4th, 1865. Although a bit of a spendthrift as can be derived from his commissioned Renoir painting. In 1874, due to troubles of readjusting to manufacturing after the war, Jenks agreed to resign, turn over his patents, royalties and all claims, and transferred all stocks to the company because he was in dept to his company after investing in failed railroad. His son was a pioneer in the field of refrigeration and engineering.

In 1890, Mary Sellers Bancroft sold the house to fellow widow Florence G. Allison. Mr. Allison was a member of a railroad car company and died at 36 years of age. Florence lived here with her two young sons. In 1900, Florence and Henry Schubert Glasser were married on the property. Glasser was a liquor dealer and owned the house free of mortgage. This period of time was known as “The Gay Nineties” and was defined by the sophisticated and refined Powelton Social Club, as well as the resistance of the electric trolley car, which numerous residents believed was a danger to life, limb, and property. In 1907, the title was transferred to Henry C. Off, a manufacture of teeth, which was a very profitable occupation at the time. Henry and his wife Sally lived here until they died and held their funerals in the house

In 1917, the house was sold to Joseph J. Judovich, and he registered in 1918 for the draft. He was a self-employed furniture maker, born in Russia, immigrated in 1887, and naturalized in 1895 with his wife Rose. Joseph dabbled in real estate and then became a banker. His son Irving was killed when he was tossed from the rumble seat when he was riding with four Muhlenberg students. His other son Harold became a lawyer and served in WWII, while Bernard became a doctor at UPenn. He helped invent lumbar traction therapy. Joseph Judovich died in 1930. In 1930 the house was worth $45,000. In 1931, Bernard practiced medicine out of the house. After the death of Harold Judovich in 1949, the deed was passed among the remaining women in the family, until 1956 when Rose Judovich died.

From a newspaper real estate advertisement in the 1960s, 3300 Baring Street was listed as a three bedroom with art studio with northern facing light. The house was then rented out to tenants, and some original features were lost or stolen. Post WWII Powelton Village, like many inner-city neighborhoods, experienced a significant decline. At one point in the 1960s, the FBI made it a point to monitor anti-Vietnam sentiments in the village. The village responded in kind; notices were posted about agents in the neighborhood and when possible, Powelton citizens outed federal surveillance. Powelton became a place of counter-culture and draft-dodgers. Even before gentrification was a term, citizens of Powelton were eager to put a stop to it and fight eminent domain. It was from this that the MOVE movement was born. MOVE is a primitivist communal living group that seeks to reeducate African Americans about returning to Africa. There was a blockade in the neighborhood for an entire year, which many residents helped MOVE defy and aided to the creation of a secret tunnel to Powelton Ave.

Despite the growth of Drexel University and the changing lifestyles in the region, Powelton remains a worthy bearer of the name of one of Philadelphia’s first families.

Eric and Jill Pfaff-Moody are excited to be the young new owners of Cornerstone Bed & Breakfast and they are proud to be two of the youngest innkeepers in the country!

A native to the Philadelphia area, Jill grew up in the hospitality industry. For more than 25 years, her grandmother Joan owned the New Hope Lodge in New Hope, PA. Jill spent much of her childhood after school with her at the lodge, watching her work, never imagining that one day she would own a boutique inn herself. Jill and Eric were able to purchase Cornerstone Bed & Breakfast because of Joan, and her portrait holds a place of honor in the dining room. Joan’s life’s work as an innkeeper made this all possible.

Jill prides herself on being a young female entrepreneur. She earned a Master’s Degree in Education from Hunter College and taught in New York City, and has a B.A. in Communication Arts from Marymount Manhattan College. Jill is also the owner of Imagine Works Youth Theatre, which has provided her with business and leadership experience out of NYC. She is the business and administrative guru at Cornerstone Bed & Breakfast. She also loves to sing—you will often hear her humming along to every song that comes on during breakfast. Jill also serves as Eric’s sous chef in the kitchen.

Eric holds a B.A. in Theater from Milliken University and studied Shakespeare in London, where his love of history began. He has fifteen years of experience in the restaurant and hospitality industry and has worked the last 5 years in the restaurant, hospitality and culinary industry in New York City. While in New York, he studied with New York Business Solutions about entrepreneurship and inn-keeping. He is the creative mind behind every delicious Cornerstone breakfast and tantalizing social media post. You will often see Eric hustling about making sure that everything is perfect for our guests. And he does it all with a smile!

Both Jill and Eric passionately dedicate themselves to hospitality and making sure guests have the perfect stay at Cornerstone Bed & Breakfast. Guests rave about their warmth and kindness, and notice how Jill and Eric will always go above and beyond. 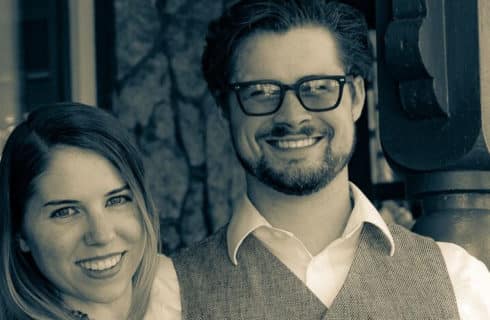 Book Direct!Get the best rates and a free glass of wine when you book directBook Now